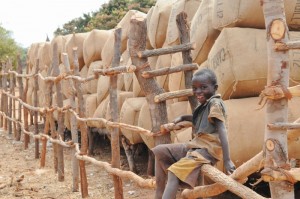 Many in rural communities need access to electricity first

As recently as ten years ago, the Ila people in chief Moono’s palace used to communicate by drums. Whether it was a funeral, celebration or emergency, different drums were used to call people in surrounding communities to come together.And thinking about it, it is only around 15 years since the advent of mass mobile phone consumption. Now it seems unthinkable to go about everyday life without a mobile phone strapped into my bag, the days of letters and telephone box calls a thing of the past.Yet for many people life goes on as always without this technology, though it is clearly in demand. It is “easier,” “faster,” “cheaper,” we have been hearing from local communities in and around Mumbwa. It saves time and money travelling.

There might be some down-sides: flirting and unfaithfulness is one “challenge,” another is technology falling into “bad” hands – thieves who can better communicate during a robbery or example. But on the whole, the benefits apparently over-ride these potential hurdles to embrace the leap across the technology boundary.

It’s impossible to say how the coming of internet and mobile phone technology will impact life in rural villages, mostly because access is currently limited and expensive.

While the prospect of better communication technology can be a great catalyst for change, it seems surpassed at the moment by other pressing needs. Electricity, road access and running water are some examples cited by the people we’ve met.

We have experienced it ourselves. Making a mass bolt for the power sockets during a stop-off at the office after days in the bush with no electricity, armed with our power-dead laptops, camera batteries and mobile phones, it’s difficult to operate modern technology with no electricity.

One thing is certain though: a sense that using modern communication technology can only be for the good, mostly because with it comes access to information, and essentially, education. In some ways it is ironic that that what rural people people want for their children – a better education – could well be what changes traditional living, pulling people away from rural village life.

When people are empowered, they make their own choices and life decisions about what they want in their future, sometimes regardless of what their “elders” or people up the traditional hierarchy might request or expect.

That is not a bad thing. It just means that keeping an eye on developments in how technology meets culture in the future, is more important and interesting than ever. It also means than the world is changing, that we are crossing paths with more people than ever before – both virtually and physically – and potentially, that can only mean more opportunity.

Doubtless change is in the air. And until the basics are on the ground in rural areas, much modern technology can at least be a catalyst for change.