In the chill of the winter night, Prince Lloyd put some more logs on the campfire, building them up tight in the centre, to create a hot fire.  “This way, we will still have fire in the morning” he said softly, as the rest of the crew were settling into their sleep bags for the night, like sausages packed next to each other under the shelter. 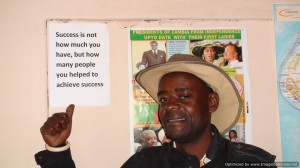 [Photo: Prince Lloyd showing me the creedo he works by, in his Connect Africa office in Mumbwa]

Chief Moono had graciously allowed us to camp a few hundred metres from his Palace, next to the community borehole.  Every day when we returned from our exploring of the community, we’d find a large gathering of noisy, smiling and inquisitive children playing around the borehole, waiting for us.

We’d interact a little bit, playing touch, or taking jumping photos, before we’d take out our laptops and start typing away about the days anecdotes, while others prepared our supper.

“It is told that a few Chiefs before this current Chief Moono, was in rule of this area.  Do you see those mountains there?” Prince Lloyd pointed to the silhouette of the mountain range in the distance, which we had wondered about when we first drove into our camp.

“The Chief of that time would go and climb up into those mountains, and when he reached the top, he would make a big fire, like this one.  The smoke would be seen from far away, and people would know to not come here.  The Chief was the authority and he was telling all the other chiefs and headsman that this was his chiefdom”.

“ And so, we will build this fire up to burn through the night, to also claim our authority here, so no animals will disturb us” explained Prince Lloyd.

Our conversation moved to explaining how a person becomes a chief in Zambia.  Each tribe and each Chiefdom within the tribe has their own way.  A chief is always chosen from within the family lineage, and can either follow the paternal or maternal line.  Some Chiefdom’s follow the criteria of eldest born within the lineage, like in Prince Lloyd’s family, where his elder sister, born of the same father, is the Chieftainess of Kabulwebulwe, with Prince Lloyd next in line.

Whereas in the neighbouring Chiefdom of Chief Moono, the family choose the chief based on the family member’s character and leadership characteristics, like his humbleness and transparency, before they looked at age or followed the paternal or maternal criteria. 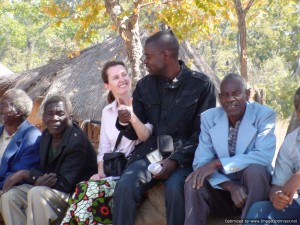 With the initial blaze of the flames dying down to just the glow of the coal from the wood, I bid Prince Lloyd goodnight, and headed to my tent, knowing that we had claimed our authority of our campsite, and would not be disturbed.

[Photo: Prince Lloyd and Telana sitting with the elders of the Chiefdom Kabulwebulwe]

Waking up the next morning, I wondered if our smoke signals extended to noise disturbance too, as the 23 or more roosters in the area had obviously not taken heed, and started in the early hours their cock-a-doodle-doo sequence, each taking a turn to claim their authority of the dawn.