The drums went all night.

The village outside the Shakumbila Palace was preparing for their important ceremony the next day, with singing and dancing throughout the night. 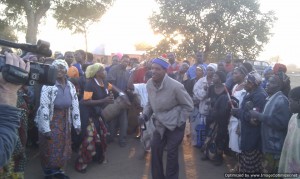 At times I would stick my head out my tent, to watch the festivities when the crowd with their drums would came outside the Palace where we were camping.  They would sing and dance for a while, and then move somewhere else into the darkness, before returning to the floodlight from the Palace gate.

Before sunrise our expedition team stirred, having mixed accounts about a sleepless night because of the drums, and how awesome it was to hear them all night.

Not long after the sun rose, the group returned again to the Palace gates with their drums, and were let in to go wake the Senior Chief Shakumbila on this important day.  After a few dances, and laughs as they encouraged some of our team to join them, there was a break from the drums, but not the busy bustle of preparation.

After breakfast and our time with the Senior Chief, we waited in anticipation for the ceremony to begin.

A while later, the dancing group arrived again, with drums and spears, to collect Senior Chief Shakumbila  who was all dressed in black with a headdress, and escort him to the field nearby where the crowds were gathering and waiting. 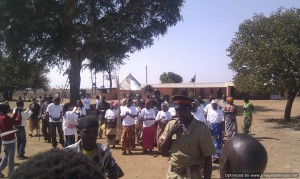 “We are the warriors who have killed a kudu and a lion” was the phrase that was repeated throughout the song, Mutapwe explained to me as he enjoyed the procession.  He is the elder and headsman of Chiefdom Moono who we had given a lift to.

As we got to the field where the thousands of people from neighbouring chiefdoms and communities were waiting, the dancing group led the way. Mutapwe saw me watching the procession and grabbed my hand, leading me into the dance.

With my notebook, pencil and phone in the other hand, I must have looked quite a spectacle, trying to pick up the rhythm and steps of the dance.  And just as I got the hang of one step sequence, it changed again.  Mutapwe took me right around the edge of the crowd shouting something to them, that in the frenzy and excitement of the occasion I can only interpret as a form of introduction. 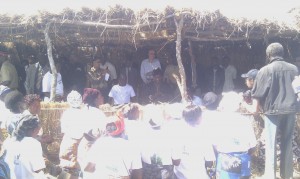 Mutapwe, in his raw elegance, lead me back to where the Senior Chief was now entering the thatch overhang to sit on his throne, with all the VIP’s and other dignitaries sitting around him, as the dancing group was presenting him.

I found myself then sitting on the ground with the dancing group of mostly elderly women, under the only tree in front of where the Senior Chief was, and next to microphones connected to the car with speakers on top of it, as the public announcement system.

The Master of Ceremonies introduced the Chief Representative to speak on behalf of Senior Chief Shakumbila (as he was not allowed to speak according to the protocol). 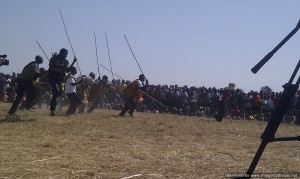 “We have recognised your presence here” he said, after acknowledging the guest of honour, the Deputy Minister of the Central Province of Zambia, and the 400 village headsman and councillors.  “We now invite all the culture groups to come here” to share their cultures through song and dance. 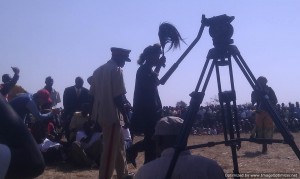 This annual traditional ceremony is called Ikubi-Lya-loongo and is of the Sala people.  It is a celebration of successful harvests and the strength of the Sala people in conquering other tribes and they acknowledge those cultures by allowing each of them to present.  Some of the groups did dances of battle, others were solo acts singing and playing an instrument.  People from the crowd and the VIP’s would walk up to the performers and put money in their pockets.

This culminated in the main dance, where the group of elders I was sitting amongst, who represented Chiefdom Shakumbila, explained the story of their heritage and founder through singing and dancing.

The dance was about the Chieftainess (played by the traditional healer who appeared to be in a trance) who created the Shakumbila Chiefdom.  She was “a mysterious women who could perform miracles like blowing water from a bundle of dry grass.  This endured great respect and honour because of such miracles. She was easily recognised as a leader” explained the MC during his live commentating of what the ladies were doing.

“She’s a new warrior, not conquered by any tribe, a symbol of the lion.  The lion is the one who has not been conquered by anyone.  If you think of fighting him, he’s going to chew you alive!”

“Today we recognise the 19th ceremony of this Chiefdom’s victories in tribal wars.”

Today’s traditional ceremonies are very important for tourists and for us to display in a theatrical way our traditions and values, and as a reminder of our past.  A mission without culture is like a tree without roots.  So let’s cherish our beliefs and share our culture with our children.”

The VIP’s and guests then started presenting their gifts to Senior Chief Shakumbila, including Prince Lloyd and Dion.  The gifts varied and included a mattress, bicycle, air compressor, food, chitenges, t-shirts and cash. 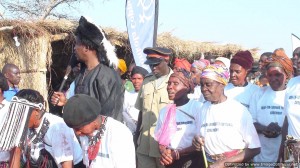 After the ceremony was closed, the dancing group escorted the Senior Chief back to his Palace, and the crowds starting dispersing, some heading home and some to the Palace, for the feast and traditional beer that followed.

We all found our way back to our camp, and started our potjie (a South African traditional stew made in a special cast iron pot) for dinner, and sat around the fire reflecting through photos and short clips of the day’s festivities. 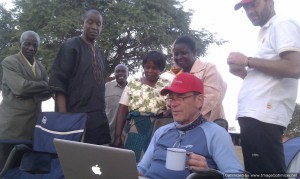 The day ended with a group of men standing under the large tree in the middle of the Palace courtyard, singing the most melodic and beautiful tunes, strumming their hand-made guitars, with us huddled around listening.

And we slept in silence that night, except for the odd and now expected cock-a-doodle-doo of the rural life. 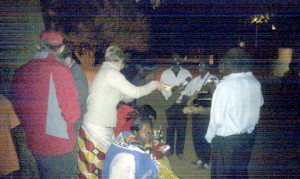