Senior Chief Shakumbila waved at us as he passed us on the dirt road in his Prada 4X4 at a little bustling intersection. 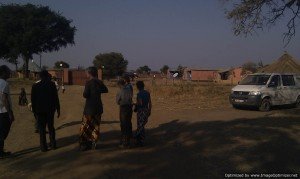 We had been waiting five hours in the small rural town Mumbwa before we got the phone call saying he was heading back to his Palace, and we could now head there to meet with him.

Enjoying driving through the scenery of African bush dotted with the occasional baobab trees, while in deep discussion with a Headsman we were giving a lift to, we finally arrived at Palace 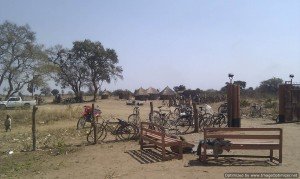 Shakumbila and parked our vehicles outside.  The Palace was surrounded by a wire mesh fence with a guarded solid metal gate, just off the road with the local borehole outside, bustling with women and children.

We were welcomed outside the Chief’s office, and ushered in to sit on the sofas around the edge of the room, facing a wooden desk.

Senior Chief Shakumbila, a tall man dressed in a grey suit with a blue paisley-patterned shiny shirt, followed us in and greeted us again.  The tone was more informal compared to some of the other Chiefs we’d visited, as the laughter demonstrated while we were introducing ourselves and our expedition, yet with the same strong undercurrent of mutual respect.

“There are only two ways that we differ” Senior Chief Shakumbila got straight to the point, as he often did with us.  “The first is what we eat and the way we prepare our food.  And the second is the way we reply to our parents”.  The Chief explained that as he saw it, in the western world, when our parents call us we say “Yes?” When a father calls a son or daughter in his community, they reply “Ta?” meaning “Father?” which shows a lot more respect to the person.

This is one of the few palaces in rural Zambia that has electricity and is connected.  The Chief sees the value of emails for running his Chiefdom, and so he took the initiative to install a satellite dish outside his office in the courtyard of the Palace, not being able to rely on the elusive rural connectivity of the networks in his Chiefdom for access to the internet.   The electricity was a godsend for me to keep my laptops charged, and at night it lit up the large tree in the courtyard, making it a striking feature of the Palace. 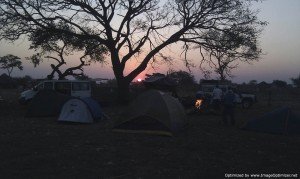 With preparations for the next day’s big and important traditional ceremony needing his attention, our meeting with the Chief was called short and we were shown to the spot in the Palace which would become our campsite for the next few days.

The Chief joined us for breakfast the next morning, on camping chairs around a fire.  The conversation over scrambled eggs turned into his interview for the documentary.

“Our living can be taken as a very different way of living, but in our tradition we understand it, and there is no competition. When you see us, you say ‘These people are suffering’. To you it is suffering. To us, it is normal.”

Yet “if we remain behind, we can’t co-exist. So we need to move forward so we can co-exist with the modern way.  The new technology we are learning now – it has changed our way of living.”  The Senior Chief felt that with education on how to use technology wisely, it brings advantages.  “We have to get more signal points so all areas are covered and we have to educate our people to use modern technology for important issues and so it won’t create conflict or a problem tomorrow between us and other people.”

“It’s very good because it has simplified in terms of delivering messages to people” and now he only uses traditions like writing letters and “a human being to deliver” a message via foot or motorbike to areas that don’t have signals. 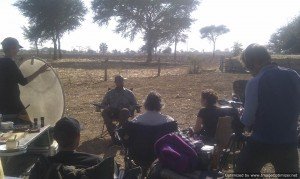 “A phone only becomes bad when you abuse it, and those who abuse it are criminals.  Connectivity is good – it simplifies communication.  Technology to some extent is a bad thing because it doesn’t bring respect.  It’s bad because even criminals have a way of communicating with people to do their work” commented the Senior Chief, when asked about drawbacks.  And as for the internet: “I’ve not yet discovered anything wrong with it, the way I have come to understand it.  But there are so many things I can’t explain because I am only in the middle ages, and I can only tell you from the time I was born.”

Senior Chief Shakumbila is an exemplary example of a leader.  He believes in walking his talk, and farms his own land to provide for his people when they are in need.  His openness and directness was refreshing, and the value he places on respect leaves a concern in his voice as he talks of how he sees it declining in the youth.  “I want to see respect of each other. Respect of everything we use, we should retain” is part of his wish for the future.

“I think we have a bright future.  Where we are going to, those people we will find, they will be enjoying themselves.  I’m seeing a very bright future with how things are being simplified (with technology).  In the past was a good way of living, but we are slowly moving (forward), as long as we see that we don’t abuse it.” 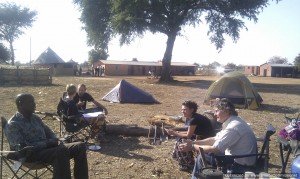 His vision was warmly surprising, in that it ended with “if you love one another then you move together in one thing.  Where there is no love, there is no future.”

And with those words ringing in my ears, he excused himself to go get dressed in preparation for the ceremony due to start in a few hours time.