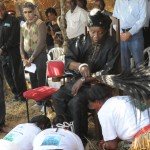 It didn’t start off too well. The question of whether or not introducing modern technology into rural areas is a good thing was hanging in the balance. Over breakfast at Chief Shakumbila’s Palace, the Connect Africa team gathered round a smoking fire with tea brewing to listen.

“Tradition has died a little death with this technology,” said Chief Shakumbila, as the smoke from the fire breezed past us. “If I had power to drive the world I would go back to those days where people were being taught how to behave. This is not the case today. Technology has especially destroyed our traditional living as Africans,” he added. “Technology has changed everything, it doesn’t give respect.” 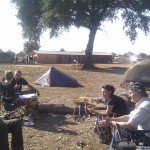 Breakfast with a Senior Chief

“Do you not think that’s an educational process, maybe you can use technology to teach children and youngsters the respect that is required?”asked special projects director Dion Jerling, perhaps a little defensively. After all, connecting up rural palaces like chief Shakumbila’s is exactly what drives Connect Africa.

“They can coexist, but only if there is a clear explanation.” Education, said the chief, is the key. He explained how in his chiefdom, a male and female team of traditional councilors are tasked with educating all young people in the kingdom about traditional ways of living and acceptable behavior  “We can use technology to preserve culture. We will coexist – there is no way we can stop it because we have to keep up with the world,” he added. 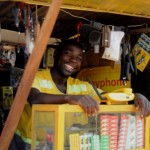 “But the key thing is to obey respect,” he said.  “A phone only becomes bad when you abuse it. Those people who abuse it are criminals who use it to communicate when they want to steal. We just have to train our people to use communication so that it will not bring conflict or a problem with other people.”

So, communication technology is only useful if it is properly applied. “We are no longer sending letters – on that part the technology is working properly,” continued the chief. “I communicate with business friends on email and I am able to communicate with any headman about any problem. To me it’s a very good thing because it has simplified delivering messages to the people. 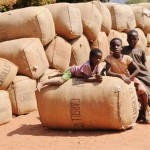 “I was talking to the Food Reserve Agency [the local authority responsible for buying and selling maize from farmers in Zambia] from my house. I ask about the date of buying maize from farmers and they tell me what I want to know so I tell the people to bring their maize. I am able to ring a headmaster anywhere and ask them if my child can have a place at the school rather than driving which is more expensive. Everything is being simplified, and as long as we don’t abuse it and keep respect for each other then you will move together – where there is no love there is no future.” 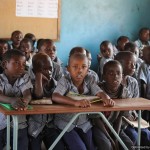 Many rural schools are understaffed

Not far away at Nambala Basic School near Mumbwa, Nancy Phiri quietly talks about challenges to the education sector in the rural areas and some of the problems experienced at her rural school. A results analysis chart on the wall next to her desk is puzzling. It indicates a massive drop in pass marks in 2007, only to triple in 2009 and then drop to its lowest point in 2011. What could account for the drastic results?

“In 2007 and 2008 most teachers were transferred and we were understaffed so the pass rate came down. In 2009 it went up because we were given other teachers, but in 2010 they did not stay and they were transferred again.” And so, with just a few teachers, the 2011 pass mark was the lowest it has ever been: only 11 out of 79 students passed their exams. 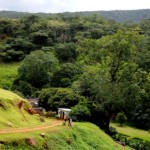 As Connect Africa found in a report conducted in Kafue, accommodation in rural areas is rarely adequate to attract good teachers and keep them – water, electricity and basic comforts are often lacking. Many feel isolated with few communication facilities and mobile phone networks can be patchy at best. Keeping up with family, friends, news and even local education authorities can be tough, with salaries rarely good enough to compensate.

Nancy is lucky enough to be able to use her phone at school, but more technology is welcome. “Computers can help because learners will be able to learn even with a few teachers,” she said. “Modern technology can also improve teaching as pupils and teachers can use the internet for research,” she added. 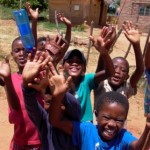 Moving together means empowering the next generation with information

Although Connect Africa does not specifically focus on providing or teaching people how to use ICT’s, the organisation has partners who do educate communities  in how to use technology, improve their education and even access health and agricultural information.

In the words of the chief, Connect Africa promotes “Moving together,” because access to connectivity and being able to use it positively for development are two different things.