“It will increase our standard of living” exclaimed Charles Kasebausha in response to our question about what introducing more technology in the rural areas would mean for him.  A few curious children’s faces starting appearing on top of the bales of cotton we had asked 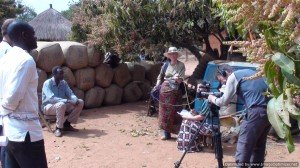 him to sit in front of.

“This can happen, because younger ones who have phones have no problem communicating with parents at home when they are at school.”

This Farmer in the Chiefdom of Moono, was also a Father, and a concerned one.  As any parent can contest, you want your children to have the best education they can, and in rural Zambia this often means that the children have to walk far to go to school, or end up finding alternate accommodation near the school, but far away from their parents.  A simple sms once a while to know they are ok, is a different quality of life to not knowing for weeks and weeks.

Yet the problem is there is either very little, or no coverage in the rural areas, due to it not being sustainable to introduce coverage- until now.  With Connect Africa having found some viable solutions, we were on this expedition to find out more about our perceived ideas about the impact on and need of the rural communities. 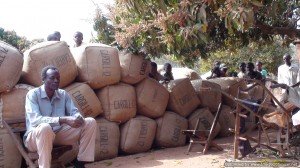 “And with TV of what is in England, which I can see here in Zambia, I can know what is happening” continued Charles, with more faces with big eyes appearing on the cotton bales, and getting more adventurous in nearing where our well spoken interviewee was seated.

Charles felt that having access to what was happening in the world would help him in his farming activities by bringing him ideas like solar systems and irrigation solutions.

He also appreciated being able to call someone very far away and in a few minutes “all is solved”.  Charles grows cotton, maize, ground nuts, soya beans, mealies, tomatoes, sorghum and other vegetables, and has a variety of live stock too.  He sells his harvest locally, as the roads are in too poor a condition to make transport of his produce out the area viable.

“With cell phone you can call a buyer and confirm the price and it helps to get to the market”.  Confirming what the current price of his produce is in other areas of the country, and within larger markets, ensures that he is competing fairly in the marketplace. 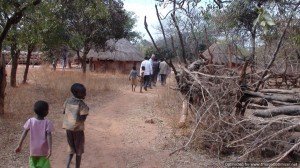 Charles then took us on a tour of his farm, with his new entourage of film crew, Moono Palace Chief Representatives and elders, journalist, architect, blogger, and a string of children.

We saw the kraal where he keeps his cattle at night, the goat house, the pig pen with one of the largest pigs I have ever seen lying in it, and chickens scattering as we followed him around.

We passed a hut buzzing with bees, where they bagged some of the harvest, and with a 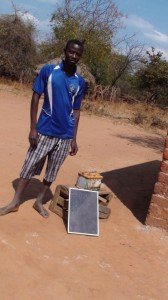 solar panel outside on the sand, catching the hot winter midday sun.  The panel is used to charge a battery, which is used to charge the cell phones to call his children and the check the market prices, and to play his elder son’s music system.

After our expedition tradition of a group “thumbs up” photo, we walked the path out of Charles’s farm, with the entourage, and packed the vehicles and left.  The entourage dwindled down to the children running after us down the road, till we turned into another road, heading to our next stop, the school. 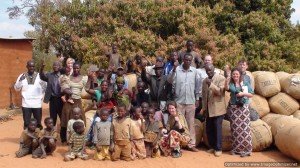