A girl from a rural village outside Mumbwa, Zambia, checks her mobile phone. © Georgina Smith

Whether it’s flicking through the virtual pages of a magazine on a touch-screen tablet outside a busy cafe, or shouting into a cheap mobile phone above the din of music on the commuter minibus, communication technology is everywhere in Lusaka.

Every day, archaic and modern worlds collide. The officer worker at his thick-set and heavy desktop computer eyes up his colleague’s ultra-thin and efficient tablet device, watching with envy as he taps the screen of his iPad effortlessly. In a more rural setting, one community phone is housed with great pride at the central bus station, as business entrepreneurs gather round to send that crucial message, one by one.

The benefits of technology and communication are no secret in Zambia, where knowledge about how to use mobile phones, computers and laptops contributes directly to wealth, impacting on everything from development in agriculture to policy and education.

With a high literacy rate of about 90 percent of the population, Zambia is very well positioned to take advantage of the potential benefits of ICTs. This year, the government will be building upon its new drive to improve rural infrastructure country-wide. 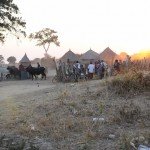 No doubt it will take time, with lack of appropriate technology and high infrastructure and operation costs in the ICT sector all posing significant challenges to development in the sector.

And, driving a 4×4 through dust bitten tracks, fighting cockroaches and setting up equipment in the middle of nowhere with not a shower or electric socket in sight, is not for everyone. It is for Connect Africa though, and our team are among those pioneering connectivity in rural areas.

Late last year, we experienced the buzz of connecting up our first rural trial site, testing out some novel new technology. We’ll bring you more on this as we engage further with government, the private sector and rural communities to find solutions to bridging the digital divide.

We experienced a true collision between culture and technology during our trip deep into Chief Moono’s Palace near Mumbwa, in Zambia’s Central Province earlier this year. Sitting in his Kingdom, waiting for him to arrive, the silence was broken by the electrical sound of a mobile phone ring-tone.

It was phone of the Chief’s representative, and he answered with a wide smile, erupting with short bursts of laughter throughout as he continued a conversation with his colleague on the other end.

Show me the money

He then explained how the mobile phone has changed everything. It’s a faster, more convenient, cheaper way to communicate when compared to the drum beats and smoke previously used to summon subjects for a party, funeral or important meeting.

Even the most basic mobile phones are crucial for everyday business in rural areas. There are no banks, and savings accounts are non-existent, so low-income groups can be particularly vulnerable to debt and poverty.

In Zambia, it is estimated that only 14 percent of adults have a bank account and 63 percent of the country’s population have no access to financial facilities.

With no savings, communities can’t afford basic assets which help them through the month and can boost their own social standing. In this regard, mobile phones are already paving the way and transforming business through mobile money schemes.

So pioneering rural connectivity and coverage is not just about giving rural communities the chance to chat. It’s also about enabling them to catch up with crucial information on agricultural commodity pricing, money transfers and essentially, how to get more money in the pocket.